The day was rather damp and overcast but four bright eyed members arrived at the Village Hall keen to set off for the morning’s walk.  Leaving the car in the approach to Llangan Church we began our journey there to examine the unique ninth century cross situated outside the western end of the Church as well as the later churchyard cross with its intricately carved capital, described as the best in the Vale.   Leaving the graveyard we descended through long wet grass to a rickety stile and over a substantial footbridge before climbing through more fields up to the village of St Mary Hill.  Continuing on up a smooth concrete farm access past the site of a motte and bailey castle – of which there was no sign – we finally reached the high-point of the walk to marvel at the panoramic views over the Vale, the weather having brightened giving excellent visibility.  Two more fields brought us to St Mary’s Church which also rejoiced in an impressive churchyard cross though its capital was rather more weathered (not surprising considering its exposed situation) than that of its neighbour visited earlier.  An ancient yew hid a small container containing mementos of previous visitors who, Robbie suggested, were probably taking part in an orientation exercise.  Here all but one of our number took liquid refreshment before posing under the aforementioned cross for a photograph. 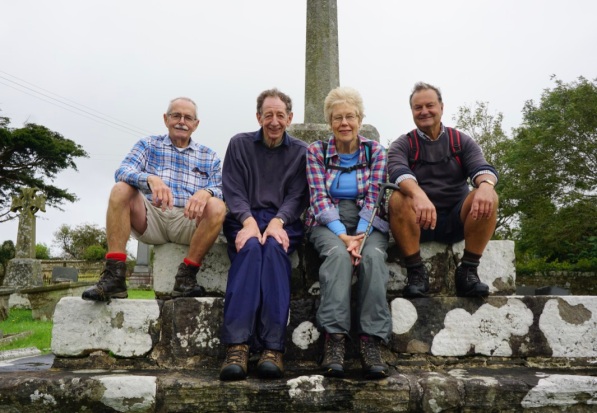 Departing this enchanting site more wet, grassy fields led us down towards Treoes where, along the way, we all successfully negotiated the slippery descent from a stile down a steep roadside bank.  A final sloping field took us into a farmyard and onto the road leading into Treoes where we were forced to stop for coffee by our companion who, being justifiably preoccupied earlier, was showing signs of the lack of liquid intake.  Opting to follow the quiet road back to Llangan, an alternative field route known to be rather boggy, we arrived a little after midday having covered roughly 3.5 miles.  Apart from a very brief spell of ‘mizzle’ it was dry and quite warm and humid throughout – in fact one person was forced to divest themselves of an item of clothing with some difficulty at the roadside!  All enjoyed the day and many thanks from me to those participating.

Please Note: New members must complete the ‘Emergency Contact’ section of the form. This is a condition of membership

(2) We also advise that you read the Information and Safety Summary (pdf) prior to joining.

(3) Check date and time of the next walk (above/left) and meet us at Wick Village Hall.

Details such as location and length of walk etc. are confirmed by email

During winter months walks may be less frequent if weather is poor.