The skies were leaden unlike the spirits of the five of us who assembled for the long drive to Cwmyoy.  Precipitation had ceased and hopes were high that any further rain would not be as bad as had been forecast.  On arrival at the Queen’s Head walkers’ carpark we donned waterproof jackets as insurance, even though conditions had brightened, and set off on the long climb up to Hatterrall Hill.  The first steep section along a lane “unsuitable for vehicles” we took at a steady pace with only a couple of brief stops to catch our breath before joining the route of the Beacons Way.  This led us up along a narrow road and eventually through a gate onto the Hill, an SSSI, and a short length of Offa’s Dyke Path.  The gradient had eased and we soon turned west onto a level track where we halted for well earned refreshment.  Great views of distant hills including the Sugar Loaf and Ysgyryd Fawr, the latter appearing to watch over us for much of the walk.  And in the skies ravens and a red kite.  We now climbed into our waterproof over-trousers for, not only had it started to rain – briefly thankfully – but on the descent to Blaenyoy Farm the path passed through bracken, wet from earlier showers.

Resisting temptation to pick the many mushrooms en-route we arrived at Blaenyoy where, after a friendly chat with the farmer, we tackled the final short but steep and uneven climb of the day at the top of which we stopped for lunch alongside a mountain stream.  Cover from a number of large trees shielded us from the worst of a passing heavy shower.  The trail now took us along the hillside towards Cwmyoy past Ty-hwnt-y-bwlch, a Grade II* listed farmhouse built in the late 16th century with later additions – a superb building in a grand and romantic setting.  Back down to earth one of our number almost came to grief on a slippery stile but was saved from contact with the ground by the swift action of my companions for twas I who was probably guilty of carelessness!  Descending steeply into Cwmyoy we came abruptly upon the Church of St. Martin, dating from the 12th to the 14th centuries, built on unstable ground resulting in the tower and walls leaning at appreciable angles.  Substantial buttresses were added in the 19th century and the building now has a Grade I listing.  A stone cross from the 11th or 12th century stands in the fascinating interior. It was here at the Church that the team photograph was taken. 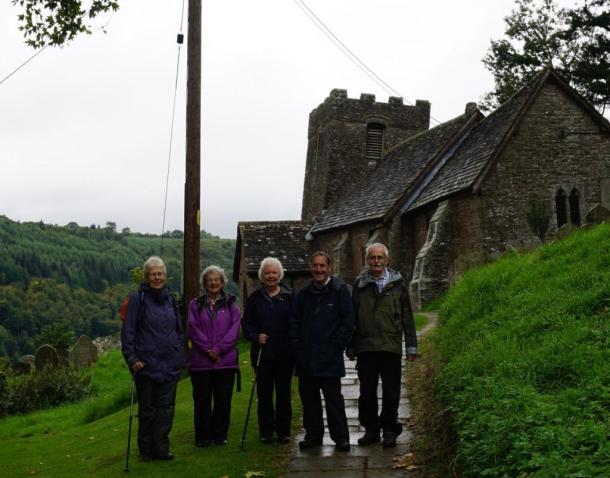 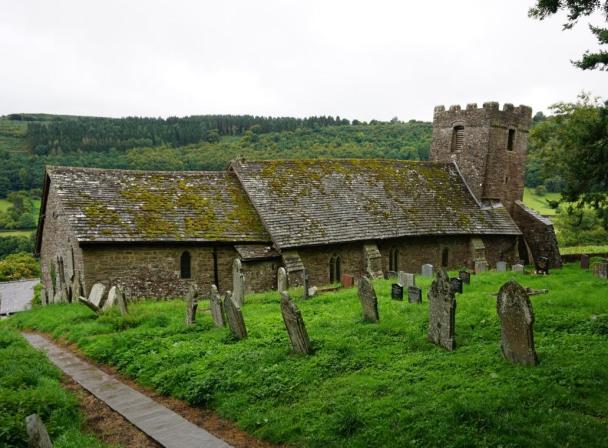 All that remained was a little over a mile’s stroll along a well maintained country lane back to our cars.  Everyone coped extremely well with what, at times, was a challenging walk.  In spite of the poor forecast there were only a few light showers and virtually no wind.  As well as the views and the calming peace of the countryside the delightful company, good conversation and humour made it a thoroughly enjoyable day’s outing.

Print off and complete the membership form (pdf) and post/deliver to the Chair.

Please Note: New members must complete the ‘Emergency Contact’ part of the form. This is a condition of membership

(2) We also request that you read the Information and Safety Summary (pdf) prior to joining.

(3) Once membership is confirmed, check the date and time of the next walk (above/left) and meet us at Wick Village Hall. Details such as location and length of walk etc. are confirmed by email

During the autumn and winter, walks are once per month on Saturday and once on a Monday