Waking up and pulling the curtains this morning did not reveal the ideal conditions for a walk in the country side. Not put off we made our way to the village hall for the 10 o’clock meet. Lo and behold eight members were there to enjoy a winter saunter. Double figures on a walk and weather not looking too promising, things are looking up.

We left the hall and made our way to Porthkerry Country Park for the start of our planned walk. On arrival the sky showed signs of brightening up. After booting up we started off still clothed for anything the winter and weather could throw at us. Soon we were tackling the steep steps that brought us on to the top of the cliffs. We were quite warm after the climb and it was not long before some layers of clothing were being removed as the sun was coming out and the skies were turning blue. It was going to be a very pleasant day for a walk. 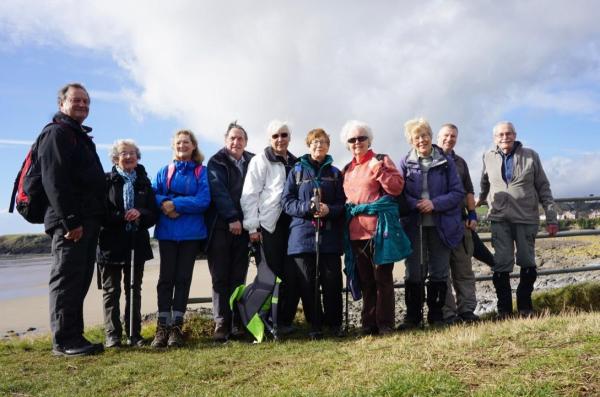 We made our way past some very large homes which had extensive sea views before dropping down into Cold Knap (knap means crest of a hill) having a look at the Roman remains of a farm stead. On through the park containing the harp shaped boating lake and admiring some model boats being put through their paces by enthusiastic owners we arrived at the sea. Skirting the Old Harbour we arrived at Friar’s Point where the attached photo was taken. On around Whitmore Bay where it appeared that every dog in Barry was being exercised. It was a lovely day, quite warm and the area was really crowded with people of all ages. It was like summer’s day.

We proceeded around Nell’s Point, the old site of Butlin’s, to arrive at Jackson’s Bay where our picnic lunches were taken on the sandy beach before a short sharp ascent to return to the causeway to Barry Island. From here we made our way back to Portkerry by way of Romilly Park passing on the way the remnants of Barry Castle.

The walk was about 7 miles in length, conditions underfoot were quite good, the weather was excellent and I hope everyone enjoyed a tour of the “Jewel in the Crown” of the Vale.

Please Note: New members must complete the ‘Emergency Contact’ section of the form. This is a condition of membership

(2) We also advise that you read the Information and Safety Summary (pdf) prior to joining.

(3) Check date and time of the next walk (above/left) and meet us at Wick Village Hall.

Details such as location and length of walk etc. are confirmed by email

During winter months walks may be less frequent if weather is poor.